From the CRASH-B's to an online challenge, discuss the competitive side of erging here.
Post Reply
1372 posts

Just tell me what your team name is and I'll add it. No need for private messages.
Top

In the absence of their two main recent rivals, the MAD team had a big margin of victory in the March challenge. Well done!
You have to be in it to win it.
Fitness Matters, with ten crews, had the most boats launched on the virtual river.
Future Challengers:
May: RedLine Rowers
June: Garage Athlete
July: Sub7 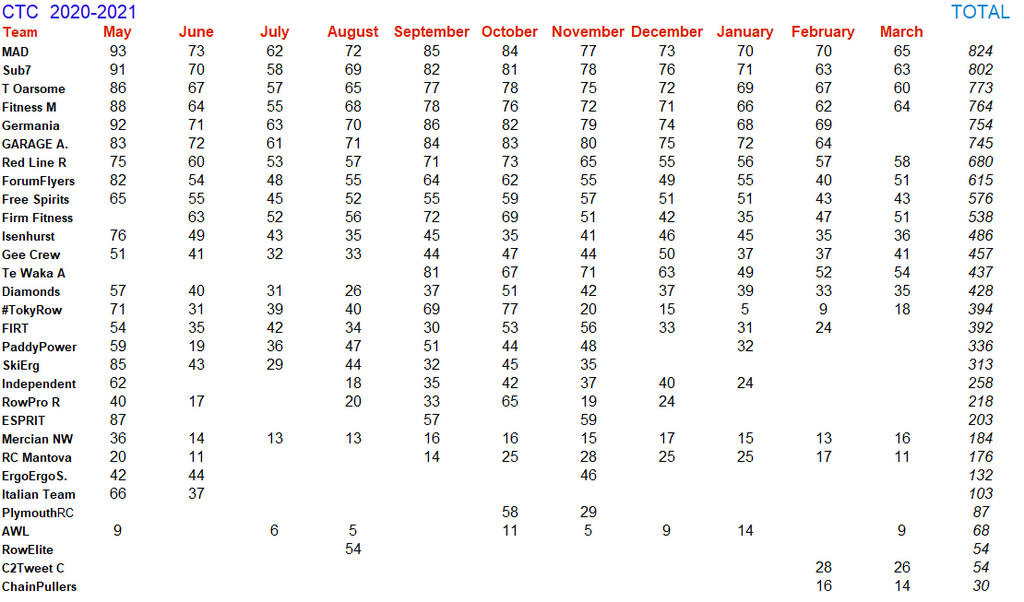 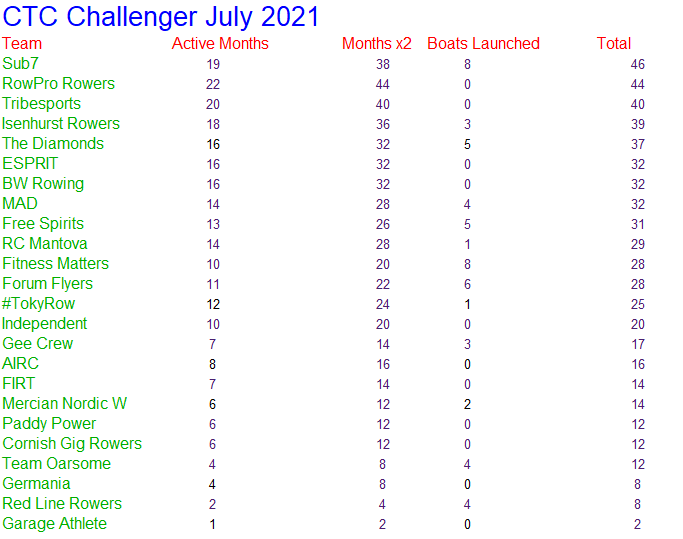 Rowland Hills has posted the May challenge:

"On behalf of Red Line Rowers, I'd like to let you know that we've chosen a challenge suitable for celebrate the 200th CTC (including one-off challenges and memorial rows). It's a very simple one:
200 seconds (3 mins 20 secs)
No spm restrictions. Standing start.
Hope you all enjoy it, and thanks to everyone who's taken part in or helps support the CTC for all of us to enjoy!"

Red Line Rowing have violated rule #5. For a timed challenge the duration must be an integer number of minutes for example 7 mins is OK. 6'40" isn't OK.

The pace calculations for May will be based on 3 minutes of rowing. Daren's software only allows for whole numbers of minutes (so everyone gets to go 11% faster).
Top

Red Line Rowing have violated rule #5. For a timed challenge the duration must be an integer number of minutes for example 7 mins is OK. 6'40" isn't OK.

The pace calculations for May will be based on 3 minutes of rowing. Daren's software only allows for whole numbers of minutes (so everyone gets to go 11% faster).

The MAD team ended the season as they had started with a victory in the April challenge. They won seven of the twelve challenges and finished in the gold position on the leaderboard. Sub7 and Team Oarsome took the silver and bronze.
Fitness Matters again had the largest flotilla with ten boats launched.
There's a rule that a challenge cannot be awarded if a team has not launched a boat in the previous month. Both RowPro Rowers and Tribesports have reached the top of the challenger's board but have not fulfilled this criterion. Isenhurst have the August challenge.
The Delivery Room and Chain Pullers have both launched boats for at least three consecutive months. As new crews, they may be awarded a challenge. This must be claimed either on facebook or the C2 Forum; it doesn't happen automatically.
Thanks for your participation during the past year. Best of fortune for the new season. 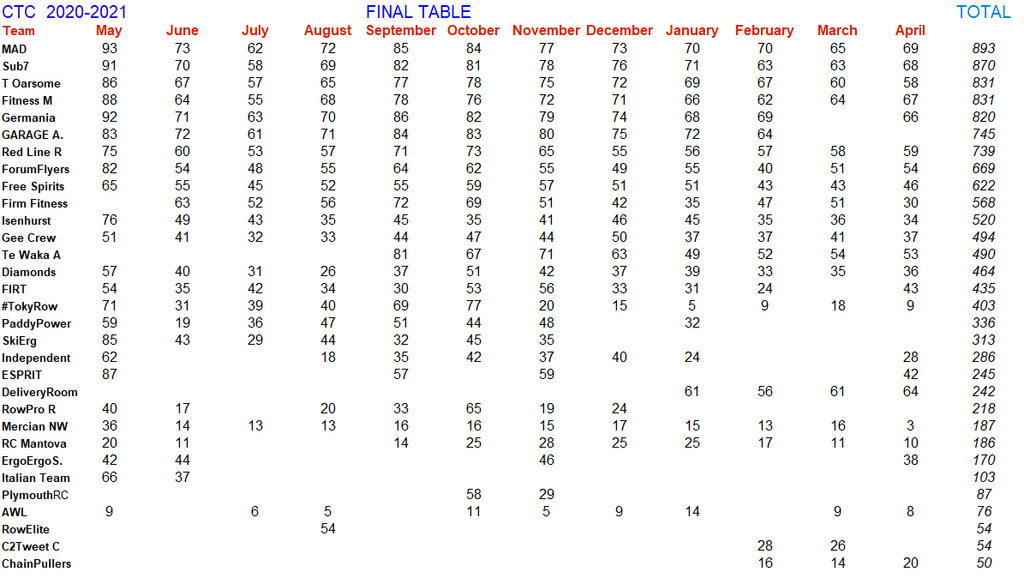 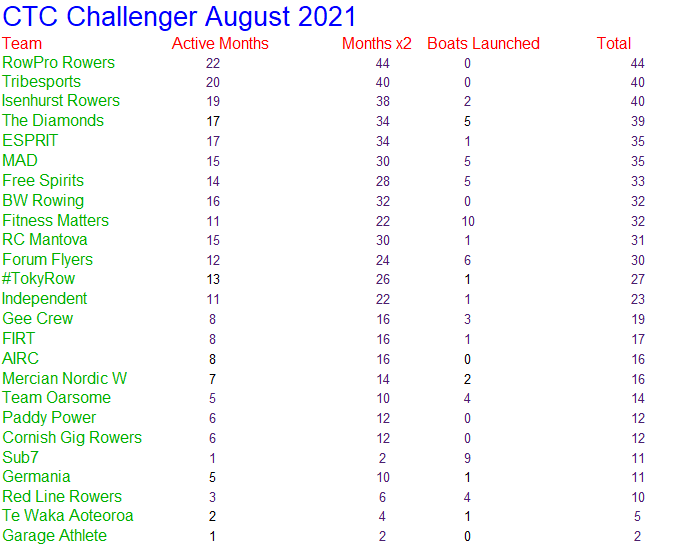 Some time to spare today so the Cumulative Points and Positions tables are now updated. They chart the relative strengths of the teams over the sixteen year course of the CTC.
The Positions table gives one point to the lowest placed team in a season and the greatest number to the winning team. 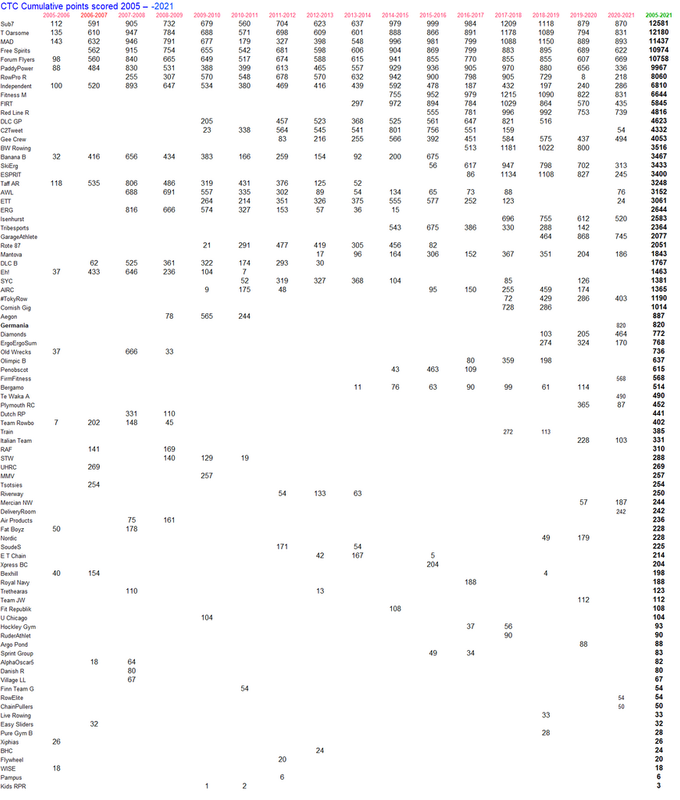 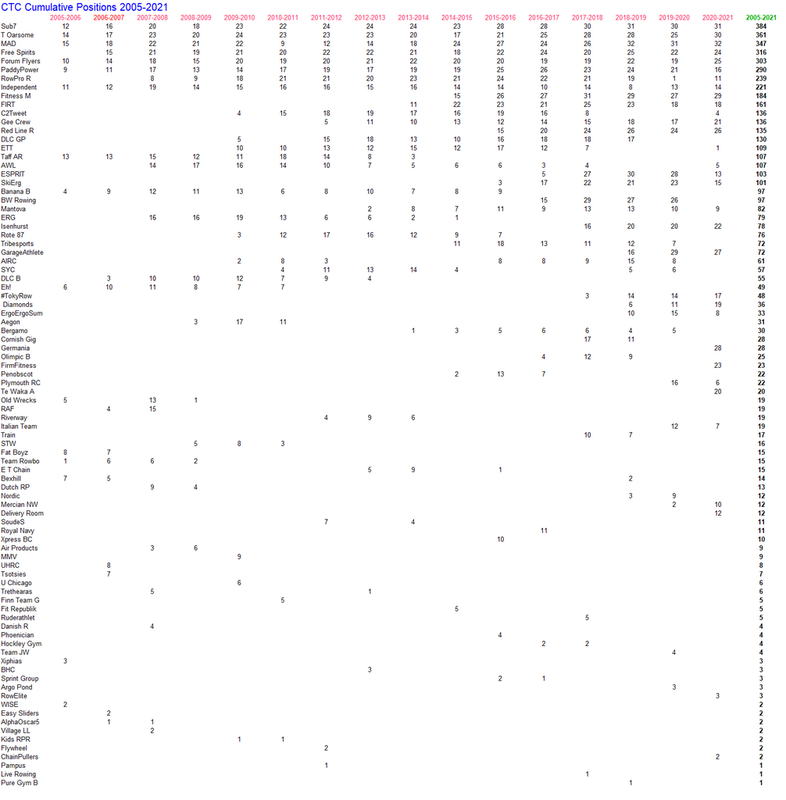 "You reap what you row"

Great stats Joe, thank you for taking the time as ever to compile them!
Top

Please can you help me.

Please can I have a password reset? User = Gordon Ullah

What is happening with the pace column in this month's challenge? Just flagging in case nobody had noticed what looks like an error. I wish I could row at 1:35.7, but I know I really, really cant